We went to Pavia for two reasons - to meet an old frield - Frederico Marcesi or Feddo as he bacame known in Australia where everyone's name must be shortened and end with an o or y. And to visit the place where Hannibal had his first battle with the Romans. The first obviously took preference and Feddo took us out in Pavia - its a beautiful university town famous for its extraordinary towers, built by competitive rich men during the Renaissance. The taller the tower, the richer and more powerful you were. However I imagine they were even more symbolic than that - a bit like a red sportscar or long camera lens today, products of renaissance mid life crises! 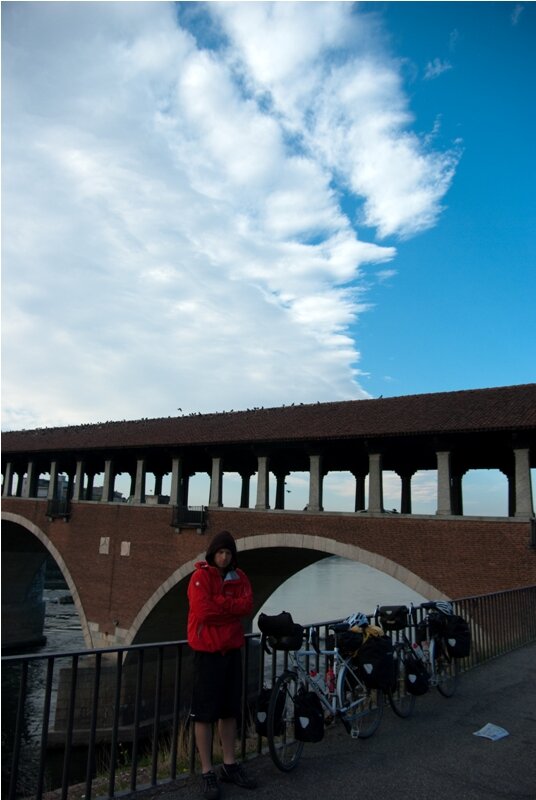 The covered bridge at Pavia 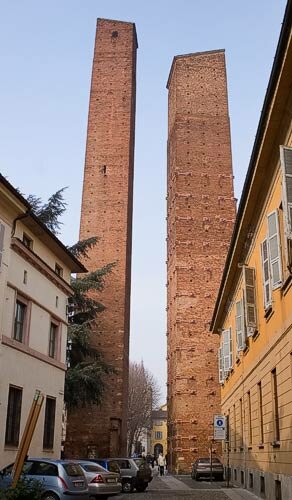 The 'towers' of Pavia!

Hannibal also fought two battles here - one a brief encounter at the river Ticinus. Here he routed the Roman army who then retreated to Trebbia, a river further south near Piancenza. Hannibal followed and even though the Romans were reinforced he heavily defeated them. Here he first showed his tactical nouse.  He lured the Romans with a small contigent of his force out of their camp early in the morning, unfed over a freezing river in the middle of winter. The Romans were cold, wet and hungry. Hannibal's main force was well fed, well slept and ready for battle - Hannibal had also put sent his youngest brother Mago to hide in the reeds to spring a trap once the Romans were across the river - Hence they won very convincingly.

Unfortunately for Hannibal all but one of his elephants died here, not of war wounds but of the cold - the last elephant Sirius survived on to carry Hannibal (who lost an eye here from disease) across swamps and down towards Florence - where we next headed to meet our own allies.

Between Pavia and Piacenza there was a brief moment of panic. We were riding along embankments built to protect neighbouring farmland from flooding and noticed a huge nuclear power station in the distance. We rode straight past the front door. All was eerily quiet until an alarm started sounding! One thing Hannibal didn't have to contend with was a nuclear meltdown in Emilia-Romagna. For some reason schoolboy physics equations came to mind; effective neutron multiplication factors, prompt neutron lifetime, mean free path, nuclear number density...how long did we have until we were fatally irradiated...then we realised, without a great deal of relief, that the alarm was coming from the sewerage plant next door...we sprinted even faster! 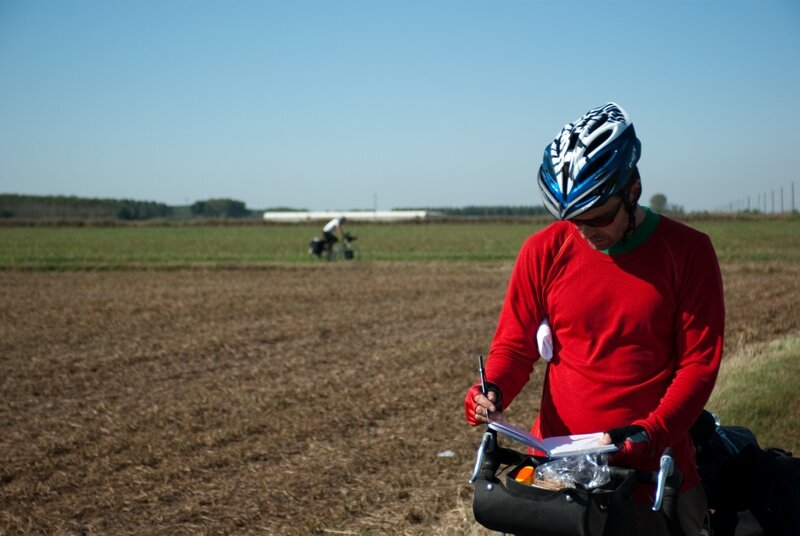 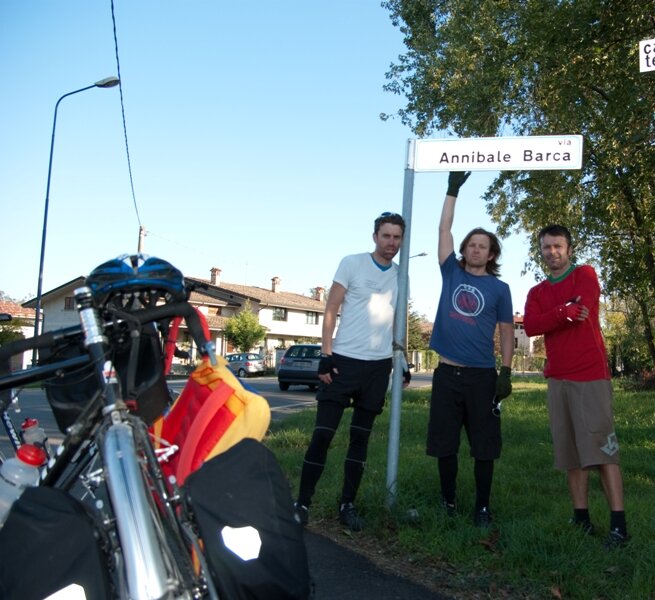 After 6 weeks of filming and riding and with a gap in our schedule we sent out a call for cyclists - This was answered by Willo and Perry ( o and y of course) whom we met in Florence with the aim of riding to Rome in 3 days.  Here are photos of our trip together, it was brilliant to have them along. They drove us along with terrible jokes, some of which will no doubt follow. After our first days cycling from Florence to Cortona, where they invariably led the pack doing the lion's share of the work - Perry led us home even when his legs were failing and I've never seen Willo so quiet but he drove us out to our best dinner of our whole trip at Cortona. 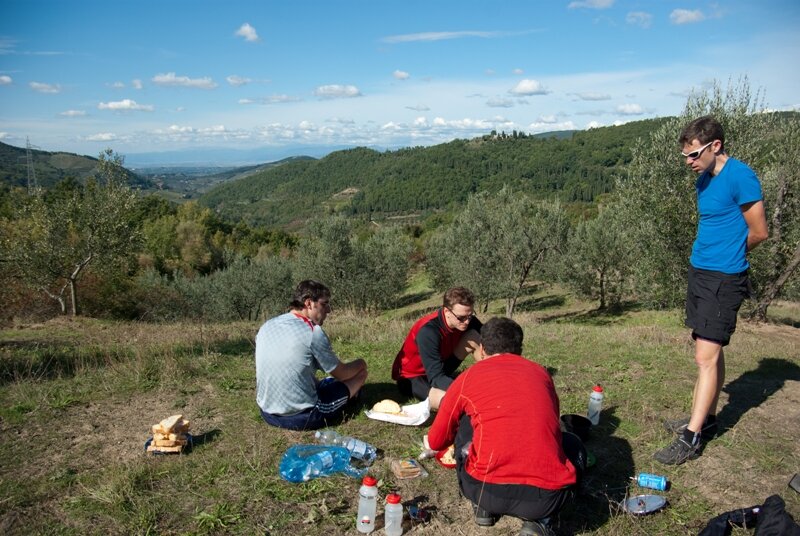 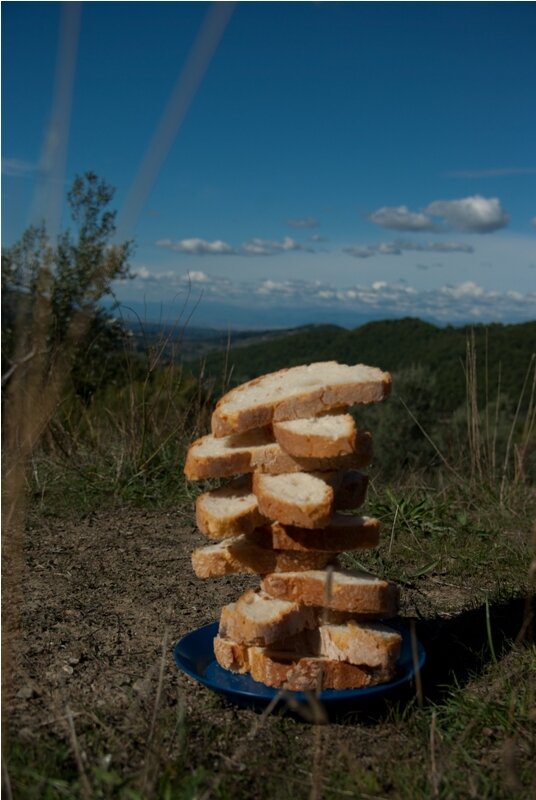 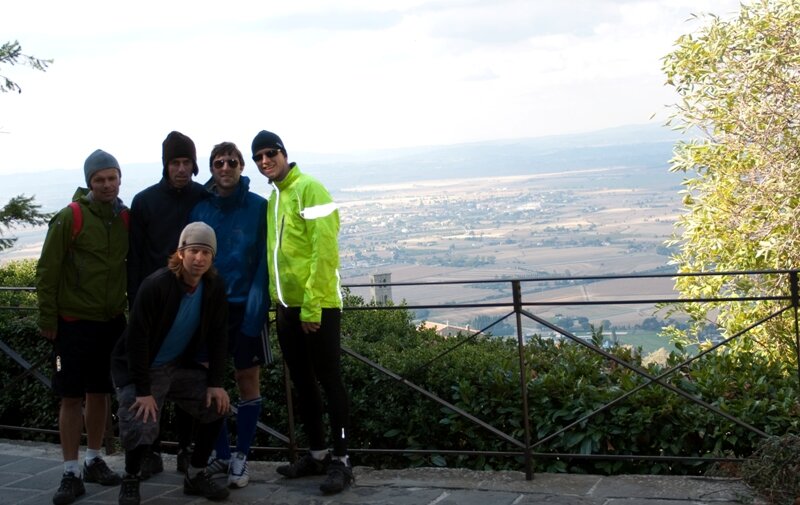 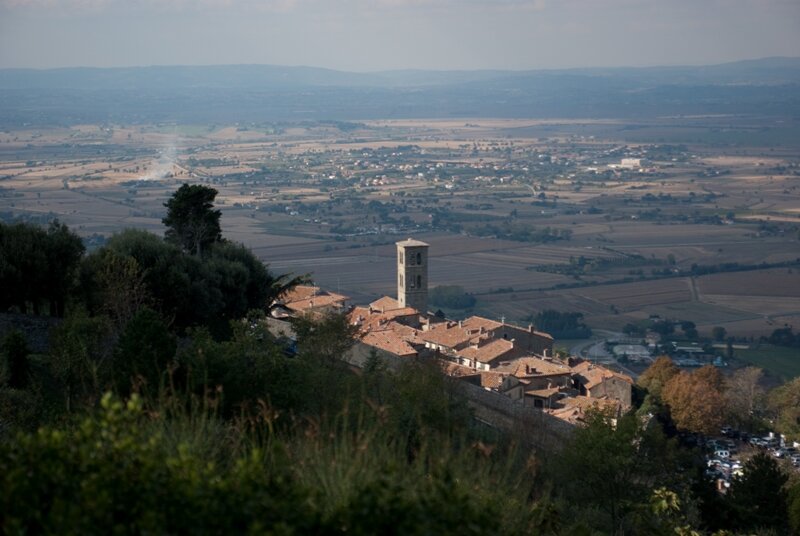 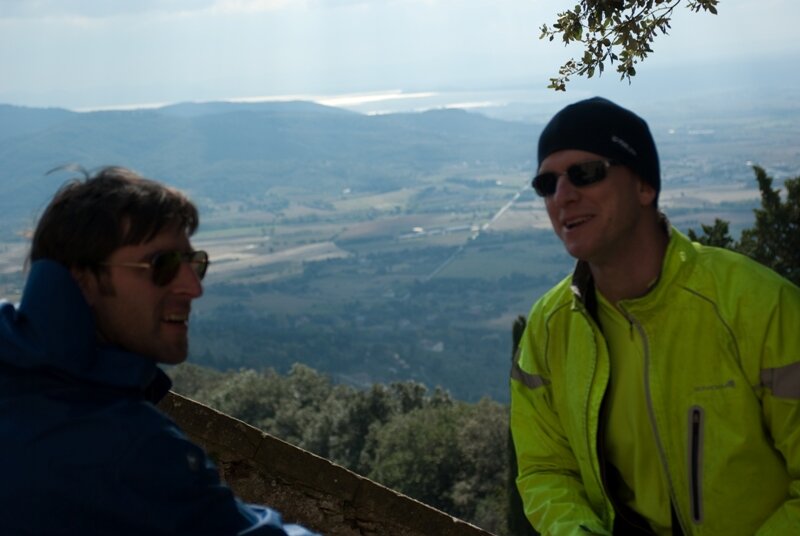 From Cortona - Willo telling his Padre joke next to the Le Celle Monastery! Lake Trasimene in the background... 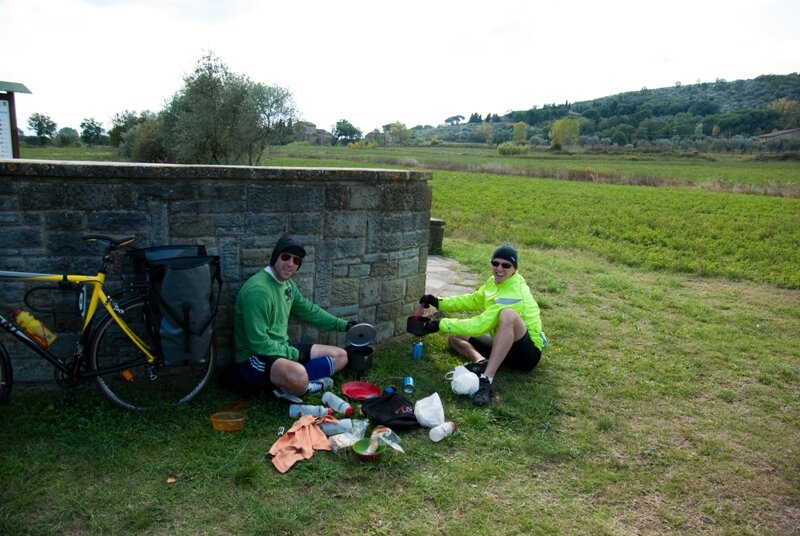 Perry and Will cooking our fresh pasta lunch - excellent guests! 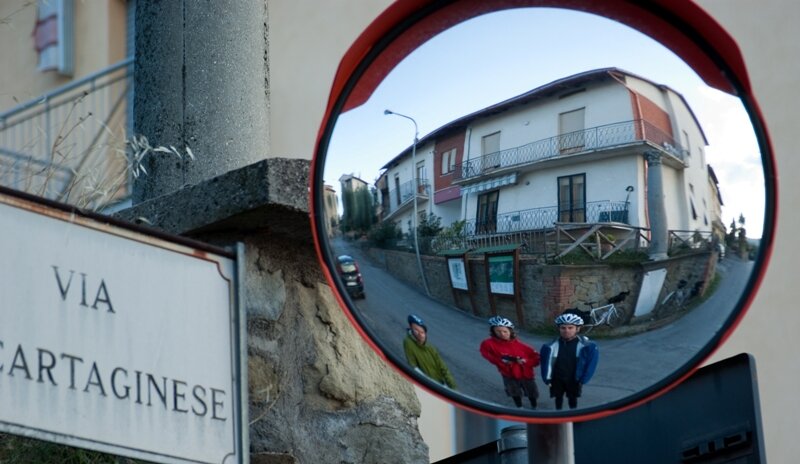 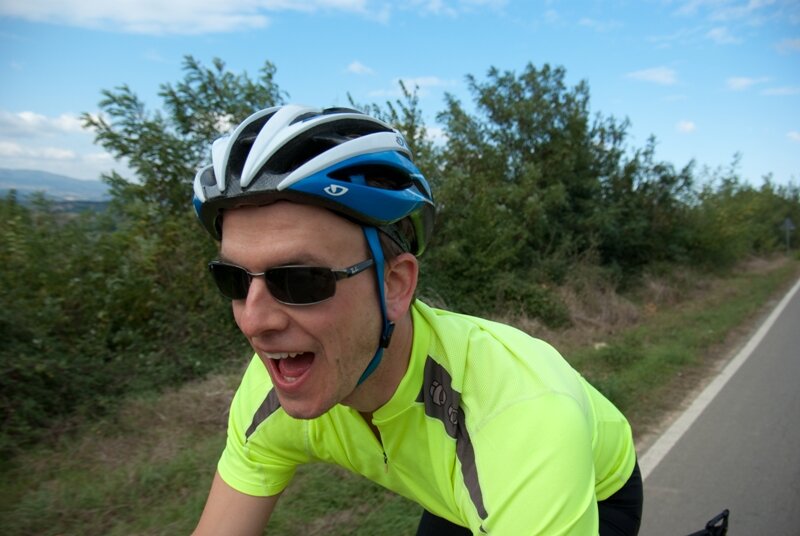 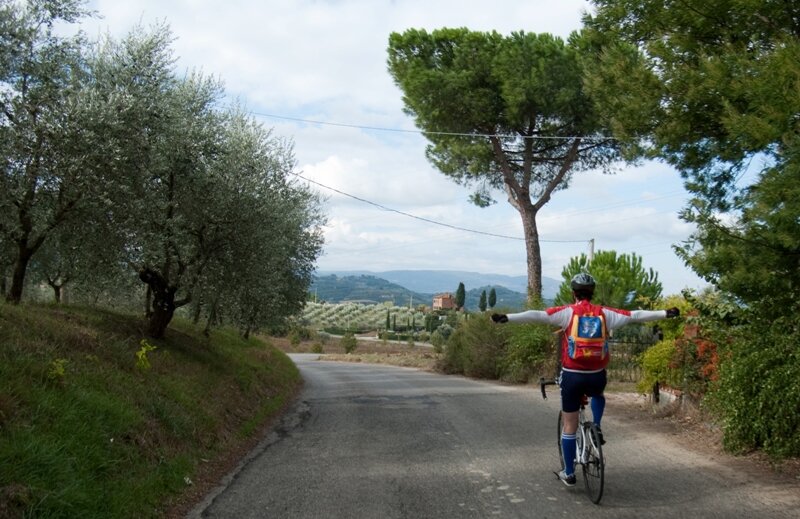 Perry on the Cross 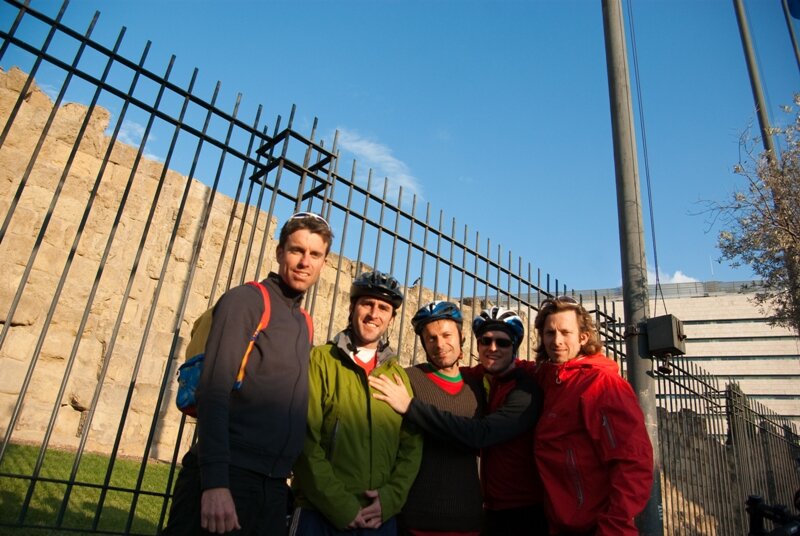 Farewell photo at the Servian Wall at Rome Termini