Our journey with the film crew continued to Lake Trasimene, where as described in a previous blog, Hannibal won a major battle against the Romans.....

For us it was much less dramatic - a dodgy highway hotel in Touro where we hung out our wet shoes and clothes soaked from our journey into the swamps and then a revisit to the 'Ciao Ciao' bar.  This time we were there to film the sunrise over Lake Trasimene rather than have a night out, like we did last time with our guest riders Perry and Will.  On that first occasion we got stuck in a square dancing, country music, over 50's night! The fact that we came back means this was obviously excellent recceeing! 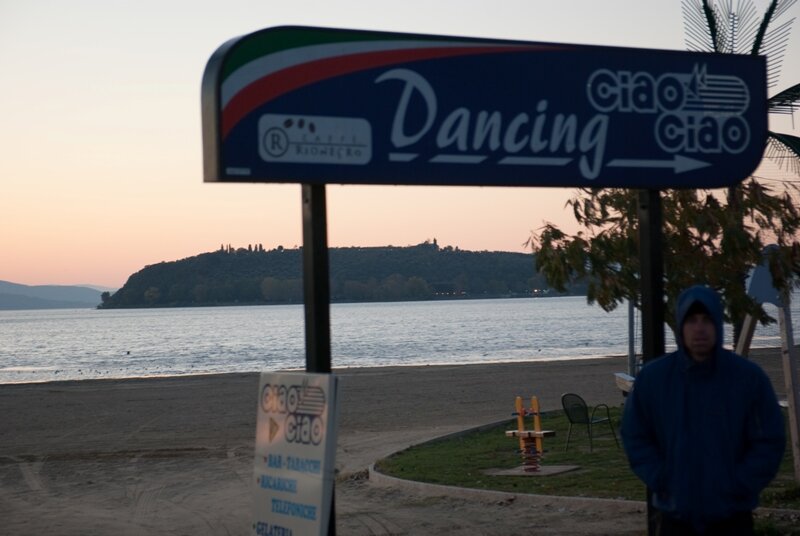 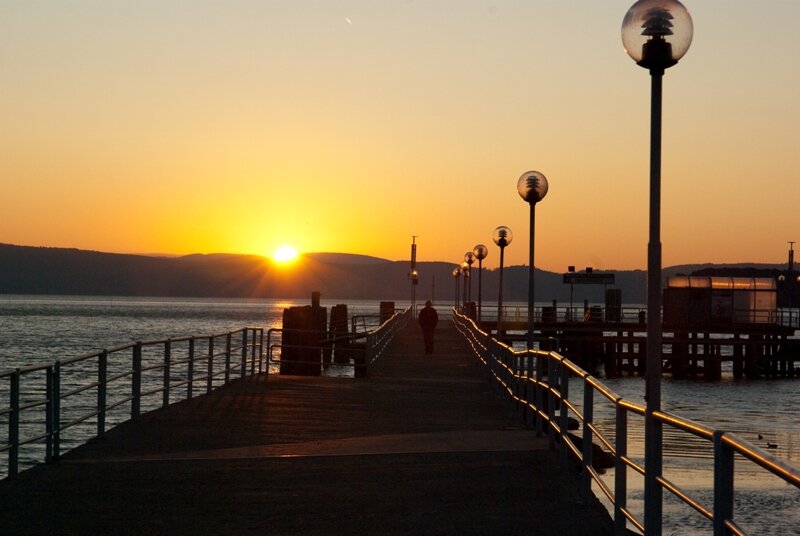 Hannibal didn't get into Rome but it was a must stop for filming, especially as we planned to visit the Quirinale which is the president's palace.  Here they have the most famous likeness of Hannibal. 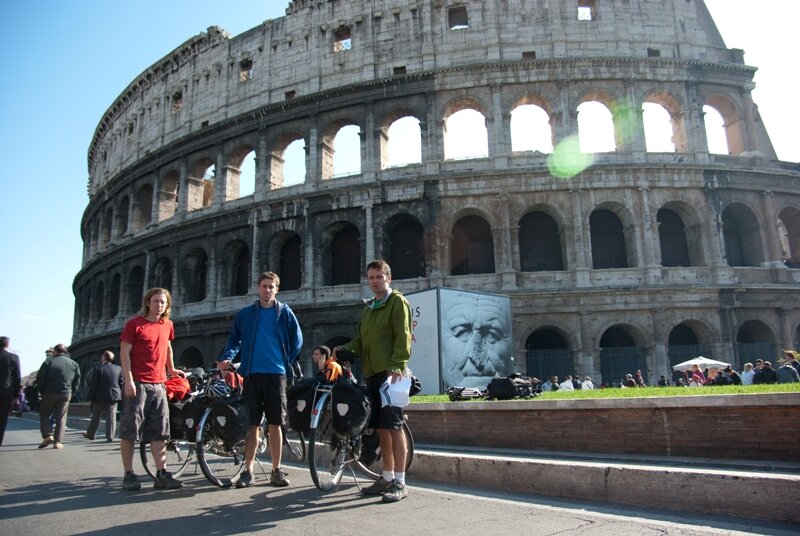 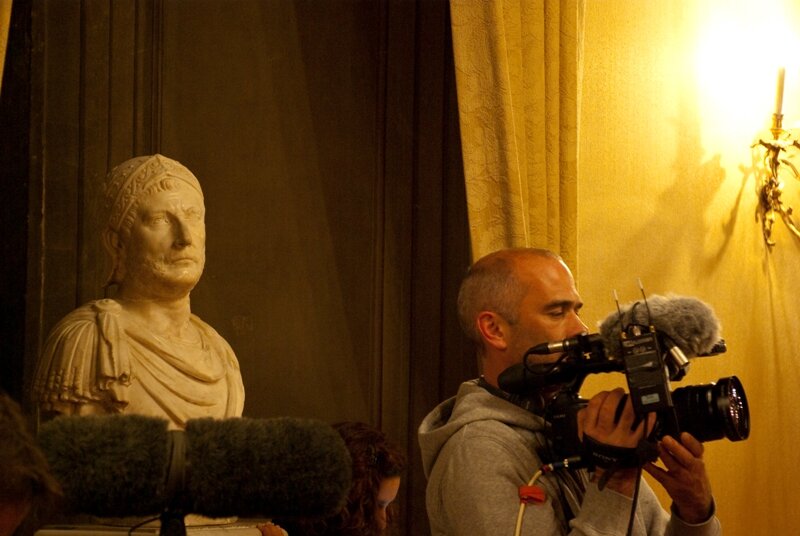 Hannibal keeping an eye on John..

The Quirinale is a very security conscious place - We were first checked out by the police as we filmed in the piazza out the front, then met by the Cuirassiers. The Cuirassiers are the presidents personal guard - to qualify for this, the application says, you have to be over 190cm tall and extremely good looking - only Italians would come up with these prerequisites - nothing about being able to protect the president or be intelligent or capable - as long as you are big and handsome that is all the president needs!

Italians love uniforms too so you can imagine these guys... dressed up poncing about trying to look as big and beautiful as possible. They seemed constantly amazed at their own beauty while we struggled to take them seriously especially when they told us that we were not dressed appropriately, of course this being the prime issue with a security force - no shorts allowed in the president's residence! Luckily they let us off after we promised to tell everyone about them - and the reality is that we have never taken our shorts off in 10 weeks of cycling so to do so, even for the president of Italy was highly unlikely!

The other force we met in Rome was the 12th legion - Caesar's own soldiers, a re-inactment group who paraded around the Roman forum and were great to talk to - no pretensions and seemingly much more capable than their pretty and giant compatriots, they would have made a much more apt guard for the president! 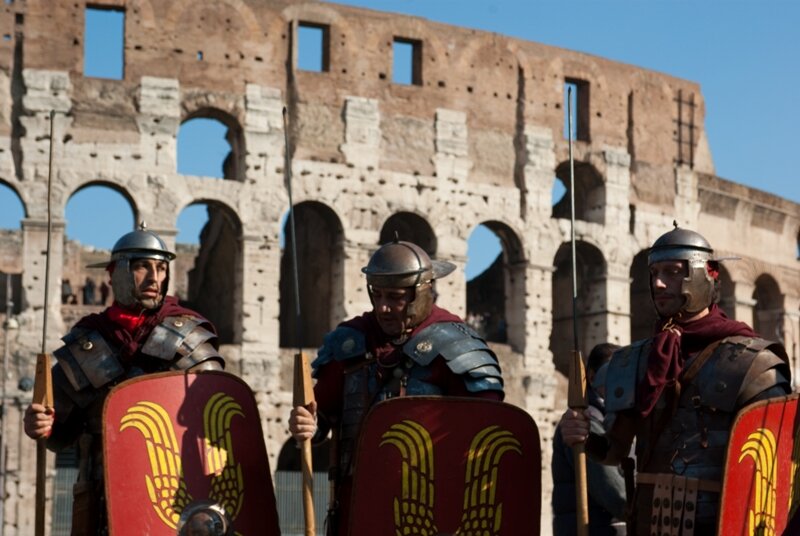 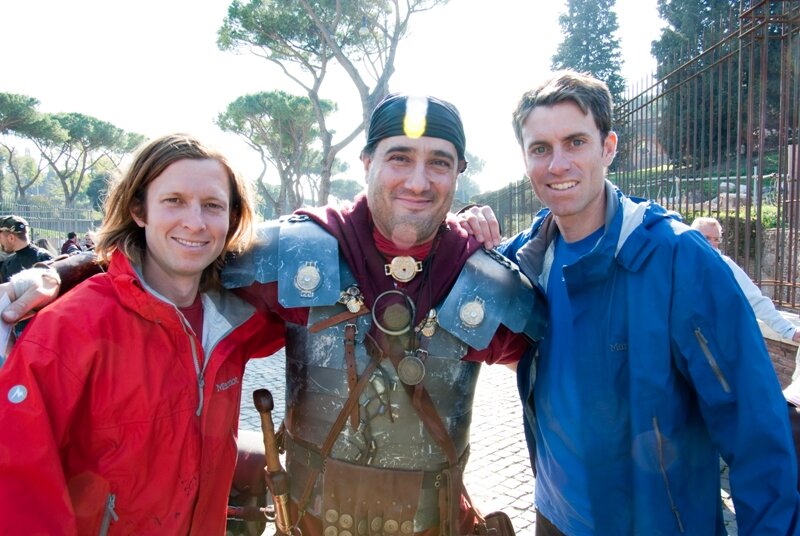 We beat him up after this photo...

We continued to Pozzuoli where we slept in a campsite in the crater of a volcano. It really stank - considering our shoes were still wet from the swamps many days before and we only own 3 coloured t-shirts each, it must have been very bad to overcome our dull senses! We did manage to cycle through the steam it produces and cook an egg on one of the geysers - I wouldn't recommend it - Egg cooked on volcanic sulphur gas makes basically, its pretty horrible to imagine, let alone taste like we had to for the camera - fart flavoured eggs! The reason we stayed here is because Lake Averno is around the corner - the entrance to the Roman underworld. Hannibal came here to make an offering to the dead to try and see his future - we too made a offering - water, wine, milk, honey and barley as he may have but we just thanked the Gods for not being run over so far - Italians drivers are not the greatest with cyclists! 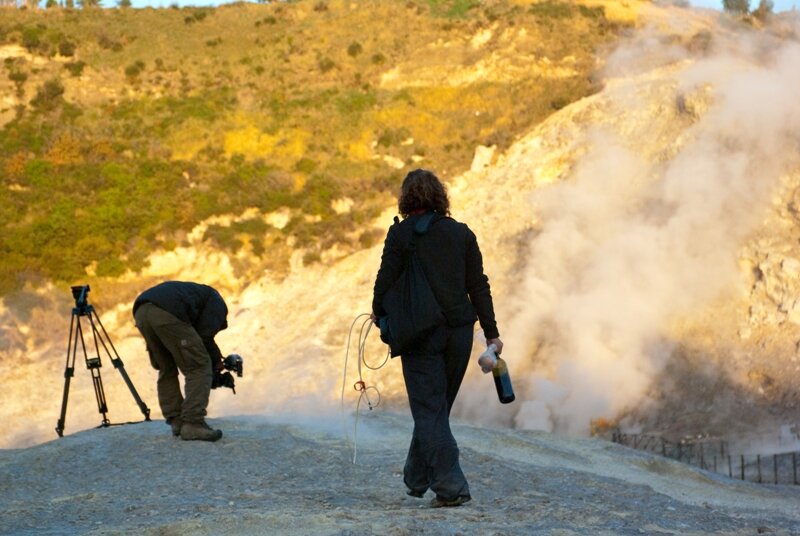 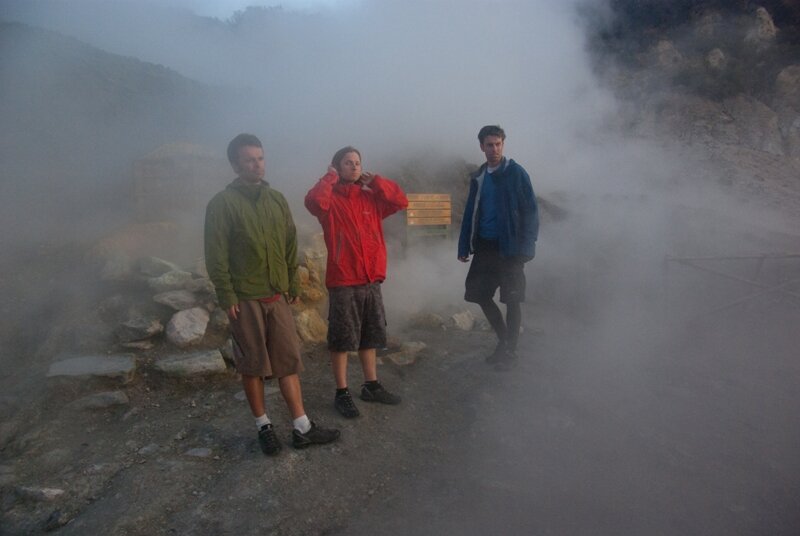 The steam was frizzing my hair it was a bit worrying!

Our days off we look forward too and with Naples so close we decided to go in for the night - John the cameraman took us to a local restaurant he knew which was excellent and we also shopped for Italian fashions.... Each year it seems the locals choose a colour and everyone wears it religiously, especially at passagiata - when everyone comes out for their evening walk. This year the colour is Purple so Ben and I got some quality purchases - multiple purple tracksuits, shirts, vests, jackets, gloves and belts... the shop assistant was fairly confused as we continually insisted we only buy in purple but happy as we bought half of their shop! We have tested these fashions since and the Italians in the passagiatas are always impressed by our kit! The only problem we have now is shoes - Since Ben and Danny lost their flip flops at the Rhone crossing they have been wearing white slippers out most nights - the sort escapees from a physc ward might wear so no matter the clothes we are still looked down upon by the fashionatas of Italy! 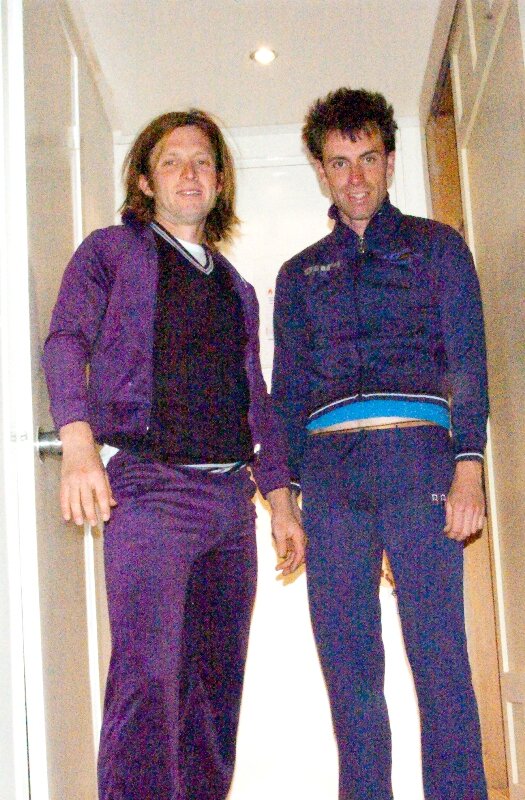 Italian Fashions at their very best!