A long day’s ride started with a stop after 3 kms at a possible ancient monument to the two Scipios, who were killed by Hasdrubal, Hannibal's brother. After a lengthy argument between Sam and Danny over its origins, which could have been caused by the fact that the stop was for something other than coffee - all of course recorded on film for posterity, normal service continued with a long ride ahead from Tarragona to Canet de Mar, north of Barcelona. 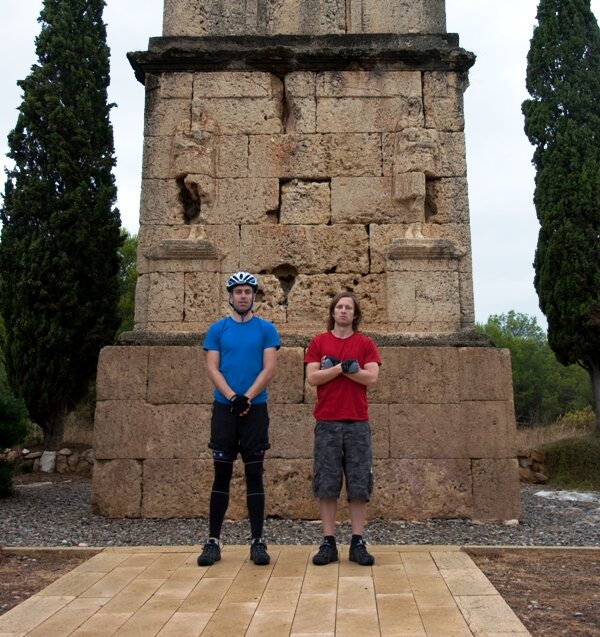 We rode through resort after resort, sticking to the beach promenades, trying as long as we could to avoid the busy roads which run into Barcelona however much too soon they ran out and there was no choice but to cycle a line, sticking to the shoulder of the road when there was one and duck as trucks thundered by.... 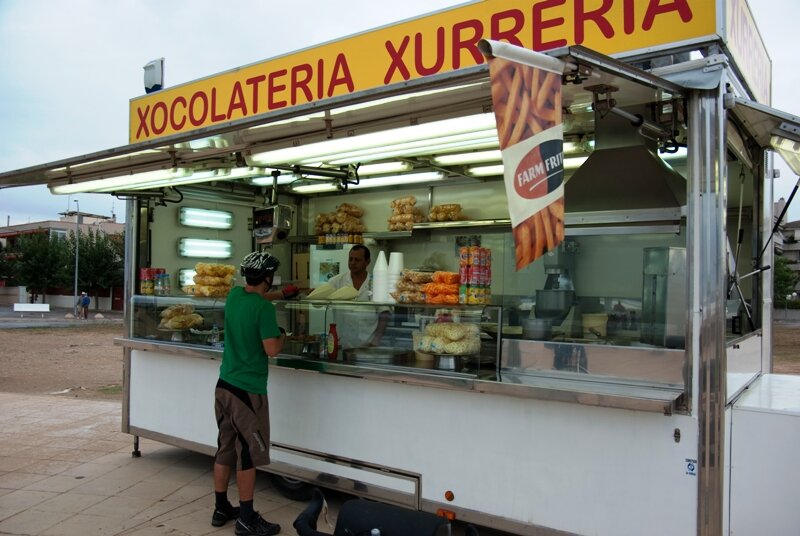 We arrived late but to an excellent dinner cooked by director Robin who has kindly cooked us pasta for our arrival on many late evenings - an essential part of the diet if you want to survive 10 weeks cycling. 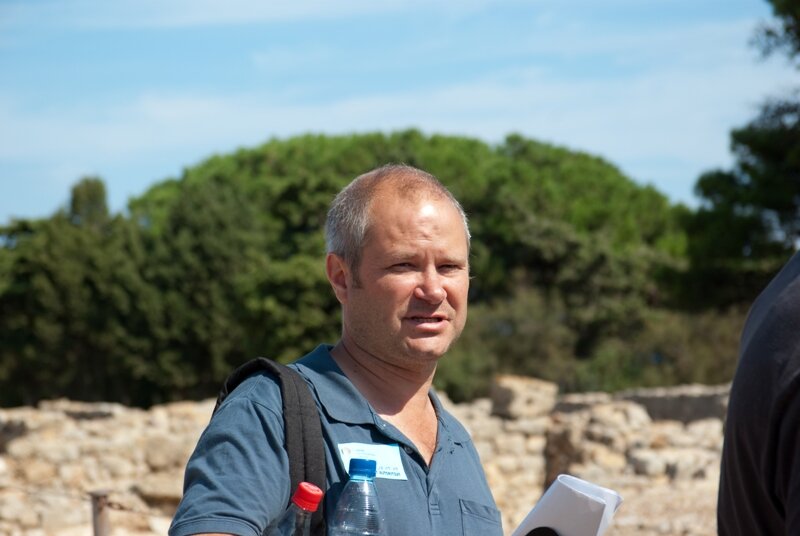 An early start and an essential 3km mark stop, coffee. Unfortunately Hannibal didn’t really do much around Barcelona! However once on the road proper we cut across country heading for Ampurias, a great Greek, then Roman city on the north coast of Spain.

It got a bit hilly and as we got to the highest point in the area a very floppy eared tired looking dog ran out onto the road looking quite lost... Our cameraman John quickly befriended him - Luckily the dog had a collar with a phone number and after more than 10 calls we found out that the dog was indeed lost and had been for 3 days, the owners were definitely useless and found it difficult to commit to even coming to get the dog. We meanwhile were negotiating with the rest of the crew to delay our descent to Ampurias to save the dog...it was getting quite tense but eventually a balance was struck and a decision made. The owners committed to coming for the dog and we left him with water, tied up but quite comfortable. John kept in close contact with the owners, ringing every five minutes until he confirmed they had him safe and sound. 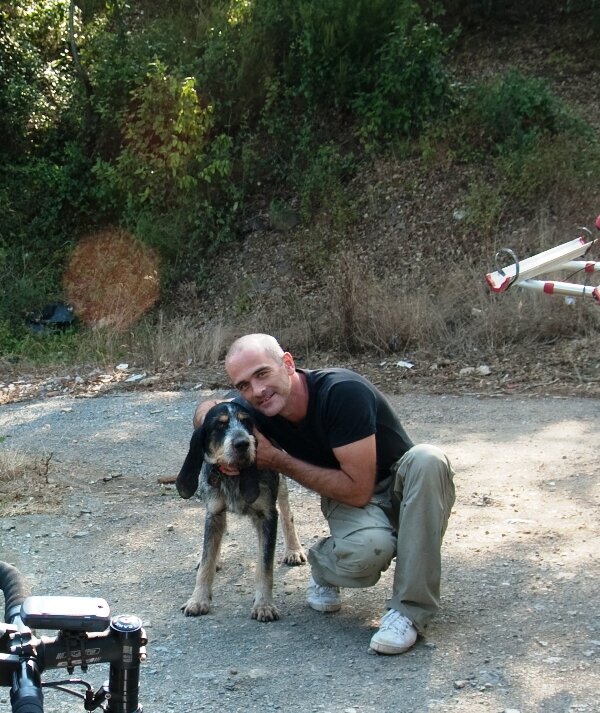 John with floppy eared dog, who was very glad to see a friendly face, especially one who feeds him chorizo,

We descended fast and visited a great Iberian site - Ullastret, a massive walled fortress which I imagine Hannibal, as he was quite sensible would have ignored on his march north. 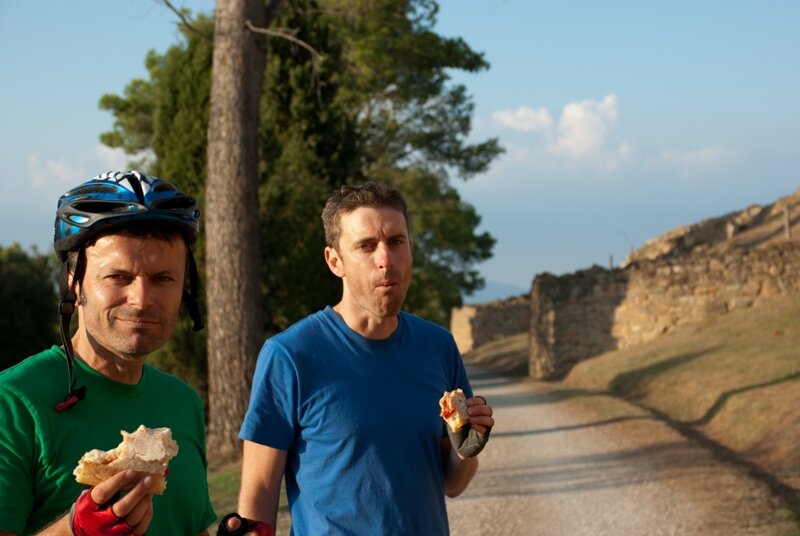 In most of our photos when we are not filming or riding we seem to be eating!

We arrived at the campsite which was quite reminiscent of the Shining, rows and rows of cabins, toilet blocks and tent sites with no one in them and everything being closed up for the end of the season.

Ampurias was excellent, Hannibal may or may not have visited there but the city was thriving at the time and they definitely feared his coming as they built bigger walls when they knew he was marching up the coast. Ampurias is a fantastic ruin - separate Greek and Roman cities, right on the coast with a huge ancient pier and a quality mosaic which has an inscription - 'how sweet it is to be reclined' in the dining room which would have had, in technical terms, those nice couches you always imagine Romans lying back on as they eat grapes....the local tv also turned up for an interview, and Ben said a lot of things he maybe shouldn't have - luckily in English and if you watch the tv clip you may pick them out! 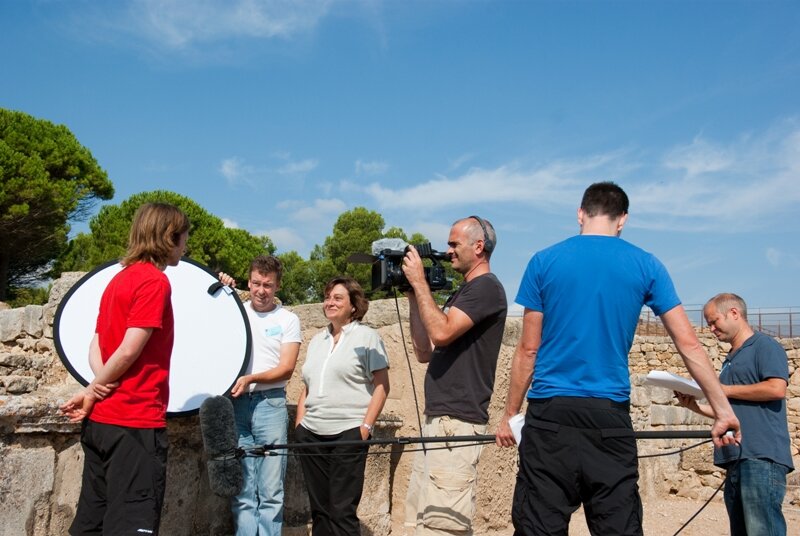 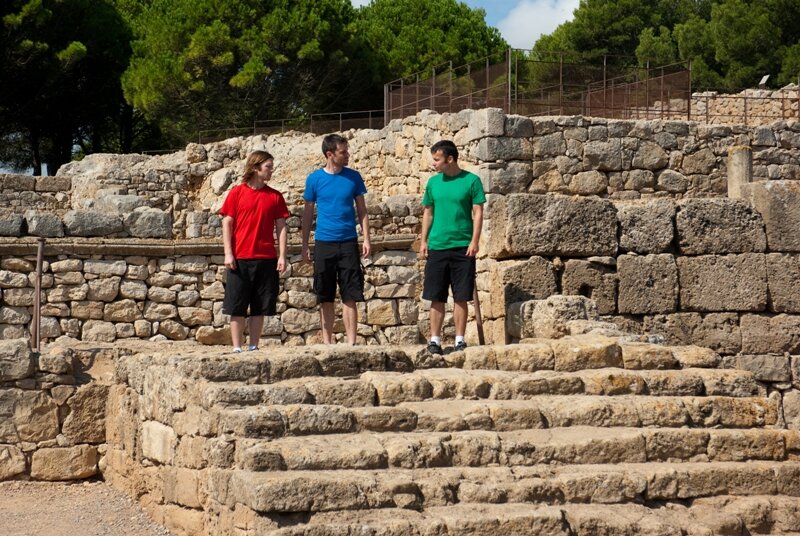 Next stop the Pyrenees as we escape Spain.....