The Golden Age began on Thursday 22nd October.  That is to say, in accordance with our agreement that we should each take a go at having total control over what we do on a day, it was my turn. Hail Caesar!

My inheritance was unexpected because I am not of an authoritarian disposition.  This may be because I am very happy with the Anglo-Australian democratic tradition, rather than other cultural strains that have admired dictators and started big wars.  Certainly as landlord of my flat in Madrid, unfortunately it was necessary to give orders and there were times when I didn't exactly excel at giving them - but some people don't take hints very well and are hard to order around!  And it's true that until recently, I probably lacked a dictator's basic craft skills. So I've been studying and now that I've had a little bit of time in command employing what I've learnt, as Mel Brooks once said, I've really found out that 'It's good to be the King!'

Before I took over the reigns of power we had been in Italy for about a week so I had plenty of time to examine the work of the local maestro.  Watching Silvio Berlusconi in a few tv news bulletins in the lead up to my rule really helped me understand what's key to good governance: a funny big grin, making sounds with little or no meaning, cracking bad jokes and exuding confidence.  That model seems to have worked everywhere and I wanted my younger brothers to have the best so I tried to apply these maxims as much as possible.

Things got off to a good start in the Italian seaside town of Barletta because I inherited a fortuitous legacy: the buffet breakfast that was part of the hotel deal confirmed the day before under the rule of Sam, my great predecessor. I didn't let us linger too long at the buffet because my brothers like to keep on the move, so after a second coffee I showed them a map of where I planned to navigate to, pointed, smiled, talked a lot and shrugged a few times. I thought I might have to use their own favourite jokes to distract them from examining the route too closely: a big burp or a loud fart - but this wasn't neccessary. Seeing that my co-operative subjects were content with the day's plan, we were soon mounting our bikes and cycling towards the centre of Barletta, en route to our final destination, the town of Altamura, some eightly kilometres inland.

The first section of our trip wasn't a very nice and so almost immediately I tried to get us off the main road which was crowded with trucks and rush hour traffic and guide us to a possible route along the beach.  The way was blocked by appartments, some half built, others falling down and when we got to the beach it wasnt exactly picturesque with much of the sandy strip covered by a large factory. Under an emmergency decree, I suggested getting to the next town called Trani as quickly as possible to find a coffee and we all agreed. A 15 km cycle and we were soon on the outskirts and with the help of a local who directed us to the old town and said it was bello we eagerly beelined for it. For some reason Sam was leading the way, but by the time we had reached the old port, I had wrestled command back.  The old port of Trani was accurately described by Ben as a mini-Marseille.  The old stone and quiet atmosphere also reminded me of a little port on the Greek island of Santorini, to which one of my subjects, forgetting his place, disagreed.  I realised that my judgement was coming under question and so to quell the possibilty of a coup, it was clear I would need to restore confidence in my reign.  I quickly took the initiative and quizzed our waiter about the location of certain places in Trani that we needed to recce for our upcoming film shoot (we will be back here in two weeks to film episode five of 'On Hannibal's Trail').  This lucky and successful cross examination would lead to us finding a barber's shop and a bike mechanic - two locations for our next Hannibal episode.  Confidence in the Kingdom had been restored but now time was the enemy, because it had been passing suprisingly quickly.  It was already 1pm and painful awareness of how hunger can so adversely affect the mood of some members of our family, I was very worried that we may not reach an appropriate lunchtime spot in time to avert cutson, an often silent grumpyness that is the hallmark of this lack of food (for more information see the helpful blog on cutty filed towards the beginning of our journey).  But we all pulled together and Sam's excellent reconnaissance found us a small square in the town of Ravu where we cooked up pasta with an improvised sauce of fresh olives in an olive paste. A good omen too because it looked like our gas cannister was going to run out but in the end it lasted long enough to cook the spaghetti pefectly.  Yummy and much needed.

The ride ahead was tough. Hill climbs and a strong wind in our faces made the going very difficult but the countryside was ruggedly appealing - extensive fields of rich brown earth, olive groves and vineyards.  The sky had grown bigger and the half light of evening was approaching. This twilight hour is often the feeding time for sharks back home on Aussie beaches but it also seems to be dinner time for dogs on Italian farms.  At least three times packs of hounds ran at our bikes and Ben was very nearly caught by an angry, big white dog. It was starting to get dark as we pulled into the outskirts of Altamura - whose name means high wall and meant in ancient tongues 'The Other Troy'.  With that sort of pedigree we were looking forward to exploring the town, but the suburbs were a bit depressing - half built houses, rubbish scattered on the sides of roads and on top of it all I nearly caused an accident that could have injured my subjects by stoppping too suddenly out of eagerness to take a picture of an inflateable teddy bear hanging in a tree.  But my brothers forgave me and soon we found our hotel. 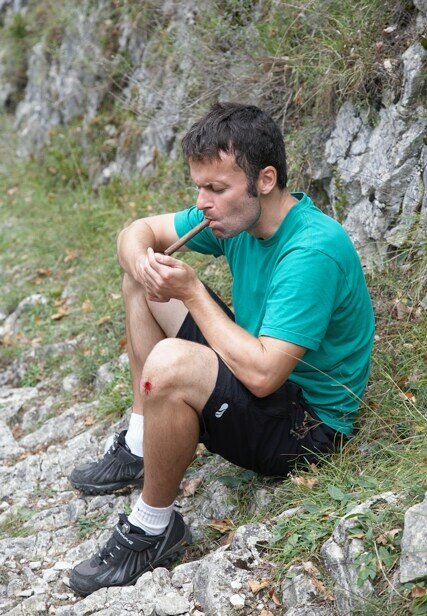 It's good to be the King! (photo by Zissi Kausch)

For dinner we set off from our lodgings for the old centre of town and we weren't disappointed.  It was pouring with rain but that gave the white stone an appealing glisten and the church in the main square with its two guardian lions on its steps was quite beautiful.  But before this evening wander we had a satisfying dinner of beer, antipasto, salad and pizza.  It was surprising how few restaurants Altamura has and it reminded us of our home town in Australia, Newcastle when we were growing up there in the late 1970s and 80s.  At that time, in central Newcastle, the Alcron was the place to go to dine, mainly because there was hardly anywhere else.   The lady of German extraction who ran it, Mrs Oberlander, was a character and perhaps at one time in her long career a provenor of fine dining.  I worked there as a waiter when the Alcron was in steep decline and when it didnt look as if Mrs Oberlander could get any older.  It was the sort of stubborn, established restaurant that still thought of itself as a centre of culinary excellence but with tired old roasts and smelly place mats you could tell it had had better days. The entertainment consisted of a charming one legged gentleman who played the piano, and the head waiter was a middle aged man with a blond wig called Willy who spoke with a European accent whose origin was difficult to pinpoint. One typically quiet night, Willy told me that he had buried his pet dog wrapped in plastic twenty years ago and exhumed it to find the dog's body perfectly preserved. He assured me that this technique would work just as well if we did the same to me.  The comment seems much stranger now than it did at the time. The waitress in Altamura's Three Arches restaurant was lovely and in no way provoked this strange memory.

The dictatorship ended at 0000 hours, 23rd October without incident, sometime during a Johnny Depp movie watched on our beds in the hotel room.