We are in Cortona - a beautiful hilltop town and Michael Knight would have (once again!) been proud of our efforts to get here. A lovely night time ride in an upwards direction along a very straight road but once we got here our dinner in a restaurant in the main square was probably our best yet.  At the hotel I had to explain that my brother Ben and I were brothers not lovers, in order to convince the hotelier to give us sheets so we could separate the double bed into its two single components - and it was worth it because we both slept very well. Wood Brother Sam is in a triple room next door with two friends who have joined us to cylce from Florence to Rome: Perry and Will.  They were very game today and went like the clappers on their bikes during our 100 km ride from Florence to Arezzo.  Now Perry can barely walk and Will who is always up for a late night was very happy to come back to his hotel bed and go to straigt to sleep.

We had a lovely ride through Florence this morning - a circuit of the Duomo and its unusual marble exterior and crossing over a beautiful bridge which showed off great views up and down river towards gorgeous contryside and appealng Italianate villas.  But the countryside surrounding they city was probably even more beautiful - right out of a Renaissance painting of picturesque scenery: rolling hills, cypress trees, vineyards. 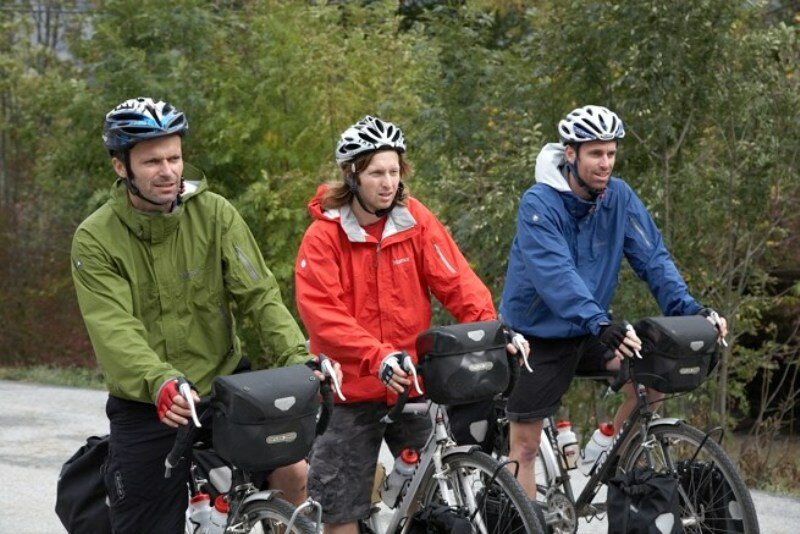 Are you talkin to me? (photo by Zissi Kausch)

A few months ago I was cycling in a very different place - through the arid landscapes of Almeria in southern Spain. I was there partly to do some long cycle rides around Cabo de Gata national park but mainly to have a holiday with my flatmates Kristina and German.  In the the history museum in the city of Almeria you'll find a cleverly arranged exhibit based on excavations of some early bronze age sites, little villages and the like.  The most impacting stuff was on life expectancy based on testing the age of the excavated human bones. If they were lucky, the majority of the adults whose remains were found in these tombs lived until they were aged thirty, sometimes forty.  I turn forty in a couple of months and after five weeks on the road I can understand why our ancestors four thousand years ago at my age may have been on his or her last legs. Cycling for the last six weeks or so, being out in the elements all day, on the move all the time has had its effect on all of us.  Im not about to die, but I have an everlasting tiredness that never seems to leave me.  I feel hardier, fitter and stronger, but I know that I dont feel as healthy.  That sounds like a contradiction but I think my brothers would agree.  We are all in better bike riding shape, but it's like we are burning the wick at both ends.

Crossing the Alps on a bicycle should be more in this vein of Rambo style physical adventure like Sam's impressive Col de la Traversette performance, and Ben's grim determination on Clapier, but in my case at least, it was a bit of a dwardle.  Montgenevre is the smallest of our three possible 'Hannibal was here' mountains.  It is under two kilometres high and my ride to get there was only 13 kilometres.  It was uphill of course, but a pretty easy ride with some lovely views back down the valley towards my staging post of Briancon. As I was riding out of Briancon towards Montgenevre, on the one hand I felt relieved but on the other a bit disappointed that I wasnt doing something a bit more difficult.  But it was still fun.  I was riding by myself for the first time and there was an extra feeling of freedom in that.  And in a way, this part of the journey was a bit of a scientific experiment.  We were all applying a number of criteria to each of our mountains to see if they really could be the crossing point for Hannibal's army and elephants.  Those criteria are based on what we can read about the crossing in the works of Polybius and Livy (which is not very much!) and include a suitable campsite near or on the summit, a spectacular view of Italy and snow on top of old snow from the previous year (see the BBC History magazine for more details).  Today Montgenevre is a ski village so as soon as I was nearing the summit my images of a Carthaginian army struggling along in a harsh natural landscape were erased by perfect ashfelt roads running past cafes and restaurants. There wasnt any snow yet and the view towards Italy wasnt spectacular but before the ski village was constructed there would have been plenty of room for an army to camp. In our humble opinions, Montgenevre is probably third in line to Clapier and Traversette as a crossing contender but in reality it is very difficult if not impossible to determine Hannibal's route based on the literature alone. We will have to start excavating to see where he really went.