Sam is sleeping next to me, hands still clasped next to the book he was reading, as we relax in a hotel in Briancon on our rest day. We are in the Alps for real now and as I write brother Ben is making his way across the Col du Clapier with our film crew. It will be interesting to see how he goes! Tomorrow it will be my turn to do Mont Genevre and then Sam will follow up with the Col de la Traverstette, the third possible Hannibal path over the Alps that we are testing.  Since we entered the foothills of the Alps a week ago the bike riding has been spectacular. Mountains like giant stone fists that leave little room for sky on all sides of us, many packed so densely with deep green pine trees, that the trees appear like bushy blades of grass. Panoramic views from the seats of our bicycles over scarey cliff edges, telescopic vistas down valleys that look like the massive, interlacing paws of gigantesque bears. It really is a dream landscape - like the covers of those science fiction books portraying the undiscovered worlds of the future gone Alpine. 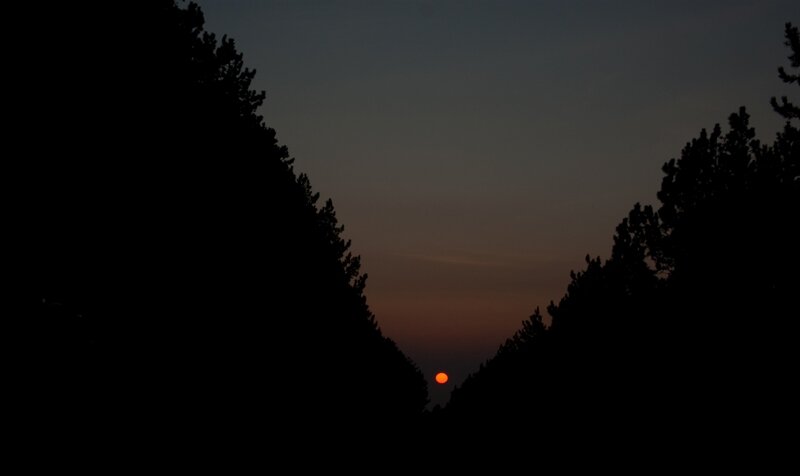 A strange sun marks our descent from Mont Ventoux

We've been lucky enough to have Zissi Kausch with us for a few days.  Zissi is a professional photographer who gave up her time to join us for nothing except the glory and thanks to her we have some wonderful snaps of us riding in this eye boggling landscape. She was also very entertaining and always good for a smile and conversation! We were sad to see Zissi go! 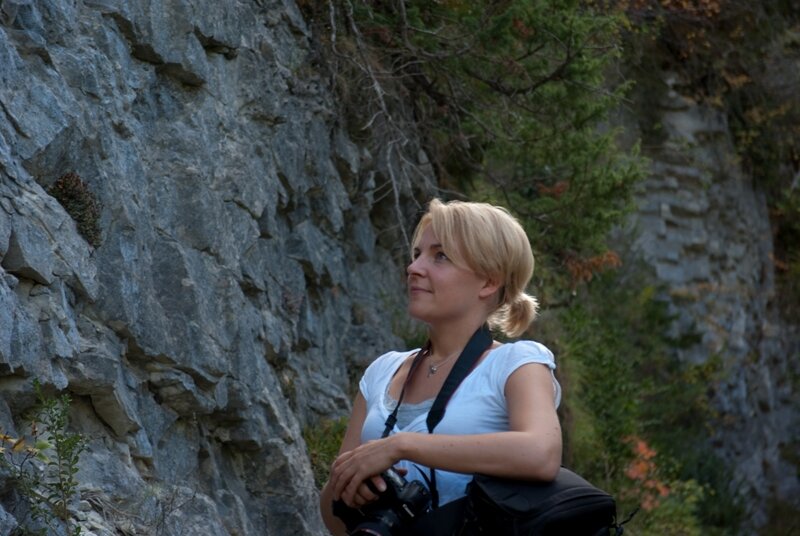 But to start this blog where it should start we have to go back a week to the village of Maillane, just across the Rhone and up from Beaucaire, where we interviewed some other brothers, Henri and Rene, who like us share an interest in history. The motive for our visit to Maillane was the discovery a couple of centuries ago of elephant bones under a house. Before the bones disappeared without a trace an investigator concluded that they could have belonged to one of Hannibal's elephants. Henri and Rene sat together outside Henri's beautiful house set in olive groves and told us the elephant story and thought it could be a good idea to dig up the aptly named Giant Street to see if we could find more bones. Unfortunately it's not even clear which house on Giant Street should be the excavation site (the villagers are far more interested in their link to Frederic Mistral, the French writer and nobel prize winner) so we rode on to tackle another giant - Mont Ventoux. 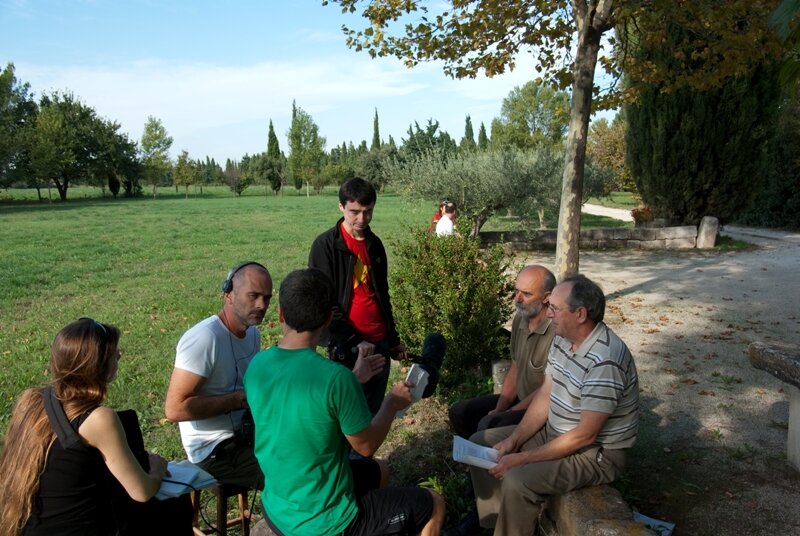 Brothers Henri and Rene at Henri's home near the town of Maillane, Director Fiona front left, Luca holds the boom, John on camera and in the distance Sam chats with Exec Producer Chris

I really learnt the meaning of physical pain riding up Mont Ventoux.  That pain would have been lessened if we had ridden the twenty kilometre long road up a nearly two kilometre high mountain without our panniers, but we decided we'd like to do it differently to most cyclists and so we loaded our bikes up with a total weight including the bike, of about twenty-five to thirty kilos. After half an hour I really didnt think I'd make it - my undies must weigh a lot more than I thought they did! And I had two hours plus to go. This was supposed to be a race but in a classic but warped edition of some sort of mountain macho man myth, it also ended up being a competition between each one of us and this giant hill. We all had big problems with cramp but somehow we managed to get back on and keep going... 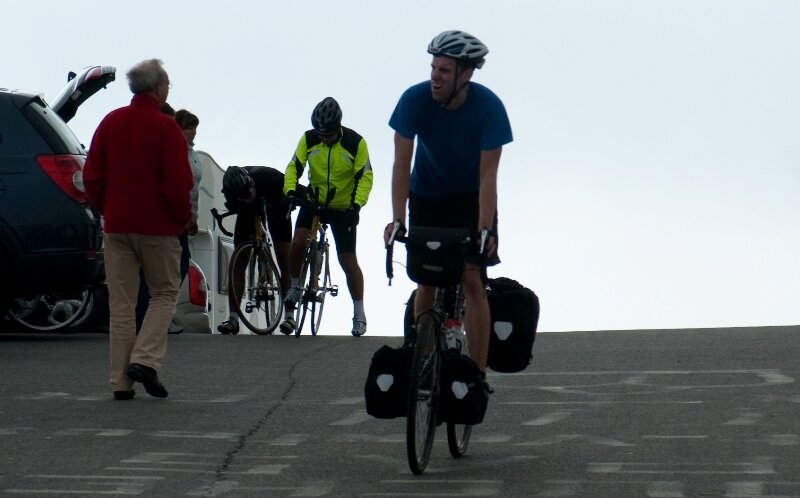 The owner of the Hotel Paris here in Briancon has just offered me a beer on the house and it has arrived...I could have done with good will like that as I was slowly peddling up Ventoux and in fact, oddly enough, a motherly looking blond woman who must have been driving up Ventoux to see the incredible aeroplane like views to the valleys below, seemed to appear with her camera snapping the scenery near the barrier at four different stages of my journey into pain.  She always said bonjour as I went past and that did help keep me on my bike.

We all got there, hugged at the summit and as the camera rolled after filming Ben writhing in agony with cramp in both the hamstring and thigh of his shaved leg (he only shaved one leg to test the aerodynamics), for a few minutes I spoke about prunes to the camera and thanked Granny for introducing me to them. (eating them during the last hour really helped me stay on the bike).  I spoke with a slurr like I had had a stroke! It was probably because I had a thicker tongue than usual because of the cold. 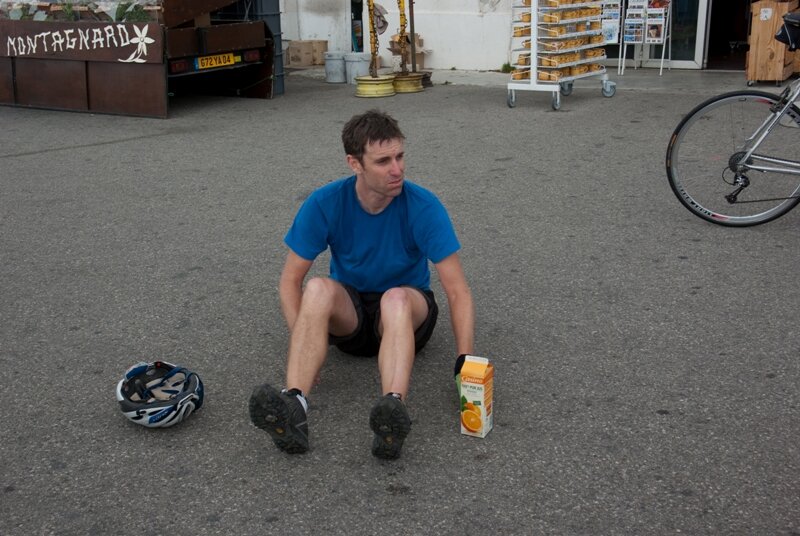 The Way to Pain II

The moonscape view from the summit of Mont Ventoux

Anyway! Our next port of call was Vaison la Romaine where Hannibal settled a dispute between two brothers by naturally chosing to side with the older brother against the upstart younger one, who was getting too big for his boots. How things change eh? Vaison is a wonderful place. The old town has been lovingly restored so that it still looks old and it winds around a hill to a castle, through beautiful cobbled alleys with fountains, views off to the moutains, over vineyards far below, and of course there are great places to stop and have a coffee.  We managed to sneak one in between bike shots. 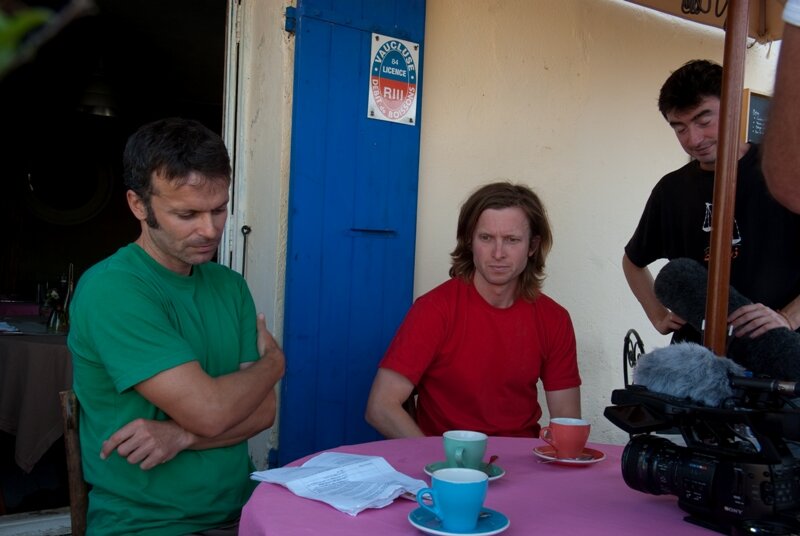