The Col de Clapier is one of the routes scholars suspect Hannibal and his army may have taken over the Alps. I investigated this one and Danny and Sam were off to check out others. After crossing the Col de Galibier I stayed in the Ambin valley nearby with the crew and I cycled off at first light as I wanted to check out a white/bald rock which is mentioned in ancient accounts and would indicate Hannibal's travelled up the Ambin valley. However after beans and rice for dinner and breakfast my priorities changed and I instead needed to find a toilet. Luckily I found one in a cafe - not so lucky for the patrons - but the kindly owner noting my sudden loss of weight gave me a free pan au chocolat! I was ready to meet our guide for the day, Gilbert, in Lanslebourg Mont Cenis. He looked a little like Billy Bob Thornton but with a squarer head and dark hair and less boggly eyes. So actually not a lot like him at all but I still asked if he'd met Angelie Jolie - he hasn't. I told him I'd stopped answering her calls (all in very bad French) and he started to look at me like I was a psycho so I thought I'd better get onto his speciality - local history. He was very knowledgable on this topic and as we drove up the Cenis pass told us about the houses that lined the route. Apparently Napolean had them built and housed them with peasants to keep the road clear of snow during winter. The road is closed during the cold months these days but 200 years ago it was open all year round so Napolean could march his army into Italy if he felt like it (I knew that before him when he was my age). And everyone goes on about how much we have progressed since then. 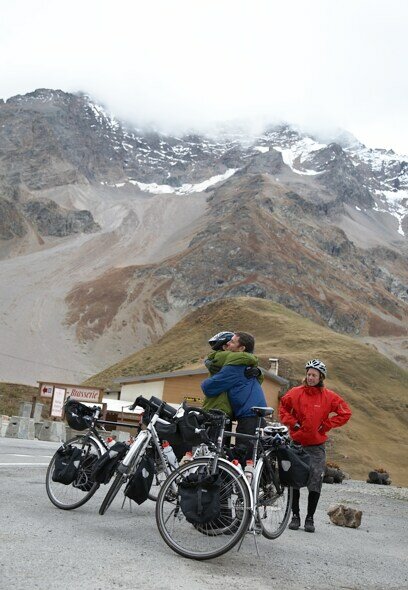 As he was telling his story in French and Andrea was helping with translations I was casting anxious looks behind as the motor home following us looked to be manourvering slightly erratically. It was a dangerous trip, first up a steep mountain pass then along a very bad road above a lake with a huge vertical drop off into the water. The passengers later confessed to having their seat belts off and an escape strategy planned in case of an emergency.

We all arrived safely although the motor home had suffered some damage - the side door no longer shuts very well, there is a large gouge down most of one side and huge chunks of plastic trimming are missing. In fact Sarkozy has forced through an emergency law and those Napoleonic houses are being repopulated to clear the Cenis pass of debris from motor homes. After a coffee from the local farmer Gilbert explained that the valley leading to the Col de Clapier has been fought over by French and Italians for ages and only since World War II has it been safe to inhabit. Hence the roads are still pretty awful and it has a very isolated feel, especially walking in fog and darkness at 9pm trying to find the way out - but that comes a little later...

Just as John and Luca were recovering from their harrowing journey they also had to deal with a cold rain that had started to fall and it seemed like the whole thing might be aborted. I was secretly hoping it might be so I could walkie talkie back to base "Murdock...Murdock...I'm coming to get you" (http://www.youtube.com/watch?v=bwlQ0qJxaGo). Apparently it is pretty difficult to film in rain and the descent to Italy is very steep and dangerous in the wet. We pressed on though and soon the rain stopped and we even had a little sunshine at times.

We filmed lots, I rode little bits of the way and we steadily made our way up the narrowing valley to the pass. There is a huge lake and pasture just below the highest point and its thought that it was here that Hanibal camped to wait for stragglers. There wasn't any snow about on the ground but the valley is flanked by huge mountains which had plenty and Gilbert reckons by the end of the month there will be one, perhaps 2 metres of snow on the ground. There also wasn't much of a view to Italy unfortunately - lots of cloud and a few peaks and the descent was certainly very steep. And once the cold and the fog had set in, darkness had fallen and lightening started flashing all around it was a very surreal descent. Very difficult without any light and any moment you felt the zombie movie was about to start. At one point we lost John and with brain power dulling I matter of factly assumed the Predator had decided to pick us off one by one. But he was waiting a little further on - John I mean. Towards the end the stars started to shine through - I'd not seen such good stars since the Australian desert and our driver once again show-cased their driving skills by getting the hire car bogged whilst kindly trying to manouvre it into the best position for us to see its lights. Mercifully our Director Fiona had prepared a life saving pasta which unfortunately Gilbert couldn't eat. Apparently he can't eat for 2 hours after exercise - he did drink about 10 beers in about as many minutes so I was a bit confused about his affliction (mine's worse). But my French is very bad so perhaps I just completely misunderstood what was going on? 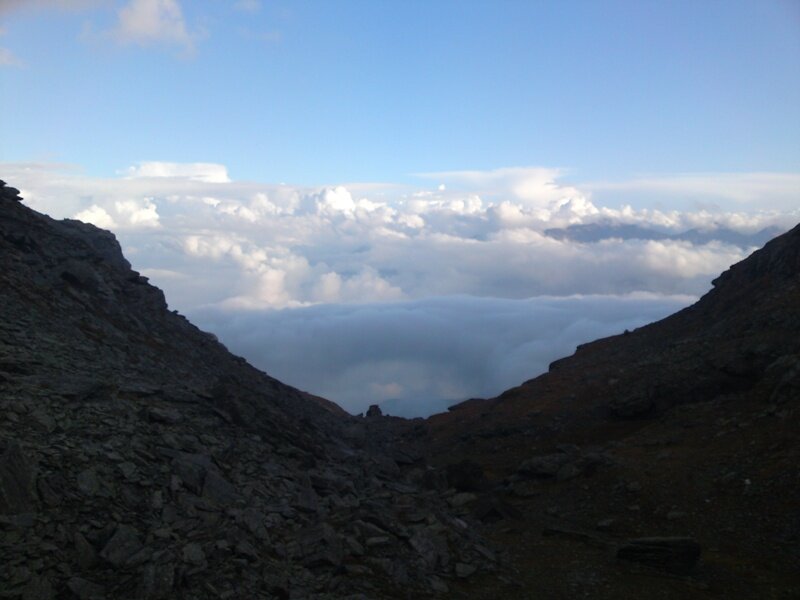 The view of Italy

It had been an epic day for everyone, riding, hiking, pushing and struggling with the bike and camera equipment up and down the rocky valley but it was about to get even more epic. We dropped Gilbert back in Lanslebourg at around 10pm but we needed to get back to where Sam and Danny where staying in Briancon. This meant taking a tunnel that goes through the mountain we had just walked over. When we arrived half of it was closed for roadworks so traffic could only go in one direction - we waited an hour for our turn to use it. Then the toll road in Italy was closed and they had incomprehensible signs to Montgenevre - incomprehesible to Luca even and he is Italian. Anyway a 1.5 hour journey turned into nearly 5 and Luca drove the lot - an amazing feat of endurance after the mammoth hike. After nearly running over a huge reindeer Luca tried to get me with the fall asleep trick - a very good trick if you are driving with nervous passengers. First say how tired you are, perhaps say it twice - just make sure you keep saying it until it registers - often your passenger will offer to drive - this is good - refuse obviously. Then leave it for about 10 minutes, perhaps fiddle with your collar, blink your eyes hard, stretch your face a little - anything that makes it seem you are struggling to stay awake. Then Luca added an excellent twist here - he moved over in his seat so I couldn't see his eyes in the rear vision mirror - a commendable variation for increased panic causing effect. Then when your passengers are keenly noting how alert you are nod your head and quickly snap it up as if you have fallen asleep. The reactions are guaranteed to be excellent. I wasn't taken in this time as I noticed a little smile as Luca moved over in his seat but for that little slip it was a 10 out of 10 performance.